By John DeGree | The Classical Historian

Abraham Lincoln was the most hated and despised president of all time, yet he is one of America’s greatest presidents. During the years before the presidential election of 1860, Lincoln clearly stated that slavery was a morally evil and corrupt institution, and that one day, the country would be either all free or all slave. His clarity on this issue led the South to believe that Lincoln would try to abolish slavery, even though he never stated he would. His election to the presidency in 1860 pushed the first Southern states to secede and form the Confederate States of America. Over the next four years, 1861-1865, Lincoln led the effort to crush the rebellion in the South.

Lincoln’s circumstances of youth were common to many Americans. He was born on February 12, 1809, in Kentucky, in a log cabin. His family was part of the Separate Baptist Church, which forbade alcohol, dancing, and slavery. Abraham’s dad, Thomas, saw Indians kill his own father. When Abraham was 9, his family moved north to Indiana. Then, Abraham’s mom died. About a year later, Thomas remarried to Sarah, called “Sally.” Abraham came to love Sally and called her “mother.” As a young person, Abraham learned to read and write at an “ABC School” a few weeks per year. In ABC Schools, children in a larger community met at a log cabin and were taught by a private tutor. Lincoln read the Bible, Robinson Crusoe, Decline and Fall of the Roman Empire, Franklin’s Autobiography, and law books, whenever he had extra time. At the age of 21, Lincoln moved west to Illinois. 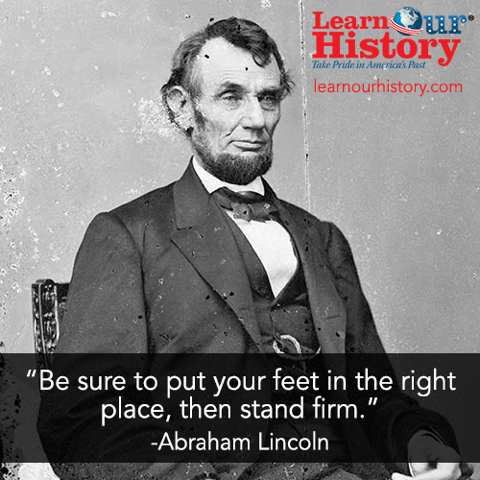 As a boy and young man, Lincoln was known as physically strong and a person of wit. He was 6 feet, 4 inches tall, lanky and wiry. For fun, he would tell stories and wrestle. Lincoln is enshrined in the Wrestling Hall of Fame, and had a 300-1 record. Once, after beating his opponent, Lincoln looked at the crowd and declared, “I’m the big buck of this lick. If any of you want to try it, come on and whet your horns.” Nobody took him up on the offer.

Lincoln was a reader, a hard worker, and a person of character whom others respected. He read the few books he had many times, and when possible, he borrowed books from other frontier settlers. While living with his parents, he worked on the family farm all day. Lincoln traveled by flatboat down the Mississippi River in 1828 and 1831, and he later received a patent pertaining to flatboats. In the Black Hawk War, Lincoln was voted militia corporal. When he lived on his own, Lincoln opened a store with his partner, who then embezzled all the money. Lincoln worked to pay off the resulting debt of $1,000 (equal to about $26,000 in 2017). Later he decided to be a lawyer.

Lincoln’s understanding of religion changed over time. As a young man, he was skeptical that God and Jesus Christ existed. Later, he believed in Christ, but he still rejected joining a religious denomination. Toward the end of his life, Lincoln was convinced of the truth of the New Testament and was led by his faith. In the election of 1846, he campaigned, “I am not a member of any Christian Church…but I have never denied the truth of the Scriptures.” During the Civil War, Lincoln professed a conversion experience to Christianity. Immediately after the Battle of Gettysburg, Lincoln visited the battle scene.

He wrote this of what happened:
“When I left Springfield I asked the people to pray for me. I was not a Christian. When I buried my son, the severest trial of my life, I was not a Christian. But when I went to Gettysburg and saw the graves of thousands of our soldiers, I then and there consecrated myself to Christ. Yes, I love Jesus.”

After this, Lincoln prayed every day and read the Bible. To a friend he wrote, “Take all of this book [the Bible] upon reason you can, and the balance on faith, and you will live and die a happier and better man.”

Abraham Lincoln married Mary Todd in 1842 and had four boys. Though Lincoln left Mary Todd at the altar during their first wedding attempt, Lincoln called marriage a “profound wonder.” His son Edward died at the age of four of thyroid cancer. William died at the age of 12 of typhoid fever. Tad died of pneumonia at the age of 18. Only Robert lived into adulthood, dying in 1926. The boys’ deaths were a source of great sadness for the Lincolns.

Neither Mr. nor Mrs. Lincoln was known for physical beauty, but they were known for their character, ideas, and determination. Mary once said of her husband, “Mr. Lincoln is to be president of the United States some day. If I had not thought so, I would not have married him, for you can see he is not pretty.”

In 1858, Americans learned a great deal about the thoughts of Abraham Lincoln through the Lincoln-Douglas Debates. Republican Abraham Lincoln was running for an Illinois U.S. Senate seat against the incumbent Democratic Senator Stephen Douglas. Lincoln was relatively unknown in the country, and many believed Douglas would one day be president. Lincoln and Douglas debated seven times, with each debate lasting around three hours. The debates were big events, with bands, food, and whiskey. At the end of each debate, the candidates shook hands, and maintained a cordial, friendly attitude toward each other. There was no questioner or moderator, only the two men on stage, speaking at great length.

At the Lincoln-Douglas Debates, the two candidates expressed greatly different views, especially on slavery. Lincoln spoke strongly against slavery, calling it a moral evil. Lincoln’s clear and unequivocal talk on slavery angered Southern Democrats who wanted slavery to expand. Douglas stated that he was personally against slavery, but he favored popular sovereignty, that the decision should be left to the people in the individual states.

At the last debate, Lincoln stated:

“The real issue is the sentiment on the part of one class that looks upon the institution of slavery as a wrong…The Republican Party look(s) upon it as being a moral, social and political wrong…and one of the methods of treating it as a wrong is to make provision that it shall grow no larger…That is the real issue.” [The black man is] “entitled to all the natural rights enumerated in the Declaration of Independence, the right to life, liberty, and the pursuit of happiness…In the right to eat the bread, without leave of anybody else, which his own hand earns, he is my equal and the equal of Judge Douglas, and the equal of every living man.”

In the Lincoln-Douglas Debates, Lincoln argued that the new Republican Party believed the Southern states opposed the ideals found in the Declaration of Independence. Lincoln saw slavery as a sin, as evil, and as a threat to liberty and equality for all. How Lincoln foresaw ending slavery, however, was through legal means, either by voting or appointing Northern judges who would chip away at slavery in the courts. He wanted to peacefully abolish slavery through law, over time.

Stephen Douglas won the 1858 Senate election against Abraham Lincoln, but Lincoln became a national political figure. All Americans understood that Lincoln and the Republicans saw slavery as morally corrupt, and that over time, they would work to end it. When Lincoln was elected president in 1860, the Southern states believed they had to secede from the Union in order to preserve the Southern culture, which included slavery.

The Civil War
Nearly the entire Presidency of Abraham Lincoln consisted of the Civil War. Over 600,000 Americans gave their lives, and over that number suffered injuries. The North defeated the South and the United States remained as one country. Immediately after the war, the northern states passed the 13th Amendment, which abolished slavery.

The Assassination of Abraham Lincoln
Five days after Lee’s surrender and just over one month after Lincoln’s second inauguration, a Southern actor conspired with others and then shot Abraham Lincoln on Good Friday, April 14, 1865. Lincoln was attending a play at Ford’s Theatre in Washington, D.C., when his bodyguard John Parker left his post to get a drink at a nearby tavern. John Wilkes Booth snuck behind the president, aimed his .44–caliber gun inches from the back of Lincoln’s head, and fired. President Lincoln was carried across the street to a nearby inn and died nine hours later.

After the assassination, Booth jumped to the stage below, shouted, “Sic semper tyrannis” (“Thus be it ever to tyrants”), and escaped on his waiting horse. Soon after, Federal soldiers trapped him in a barn, set it on fire, and a cavalryman shot Booth as he tried to escape. Lincoln’s conspirators had planned to murder a number of Republicans, but failed in their attempts. Four of Booth’s conspirators, three men and one woman, were hanged. Three others received life sentences, and one went to jail for six years.

Lincoln’s assassination immortalized the 16th President, alongside Washington and Jefferson, as one of America’s greatest heroes, and it led Congress to punish the South for its rebellion. The morning after Lincoln’s murder, Walt Whitman wrote the poem “O Captain, My Captain.”  This poem expressed the grief many people in the North felt after Lincoln’s death.

In Lincoln’s second inaugural address, given a little over a month before his assassination, he stated:

With malice toward none; with charity for all; with firmness in the right, as God gives us to see the right, let us strive on to finish the work we are in; to bind up the nation’s wounds; to care for him who shall have borne the battle, and for his widow, and his orphan—to do all which may achieve and cherish a just and lasting peace among ourselves, and with all nations.

Lincoln had planned generous peace terms for Southerners who had joined the Confederate States of America, but his assassination gave control of the government to the Radical Republicans, who wanted to completely change the South.