Amelia Earhart was an aviation pioneer and author who died bravely trying to circumnavigate the world. She was born before the Wright Brother’s first flight, but her life was defined by the airplane. Amelia was a strong-minded woman who was not interested in personal relationships if they got in the way of her flying. Pursuing a career in aviation, Amelia was constantly breaking new ground as a woman and aviator. She recorded many world records during her lifetime:

Earhart was born in Atchison, Kansas, and grew up with her sister who she nicknamed “Pidge.” Amelia experienced an adventurous and free childhood. She and her sister once made a home-made ramp and attached it to the roof of the family shed. Taking off on a sled, Amelia crashed hard, bruising her lip and tearing her dress. She said to her sister, “Oh Pidge, it’s just like flying!”

Amelia’s parents had a rocky marriage and her father had a drinking problem. As a young girl, her father and mother had to leave the state and find work elsewhere. Her grandmother home schooled her until the 7th grade. After this, she moved to Iowa, then to Minnesota, and then to Chicago with her mom. When she reached high school age, Amelia rejected to attend the local school and instead chose to go to one further away because of its science program.

After a brief stint as a nurse’s aid with her sister, Amelia Earhart caught the flying bug and never let go. In 1919 at a flying exhibition, a pilot tried to steer his plane as close to Amelia and her sister as he could to make them scurry away. Amelia wouldn’t budge as the red trick plane swooped low next to her. She later exclaimed, “I did not understand it at the time, but I believe that little red airplane said something to me as it swished by.” She then visited her parents in California, where her Dad’s friend took her for a flight. “By the time I had got two or three hundred feet off the ground, I knew I had to fly.” She worked odd jobs to pay for flight school. To reach flight school, she had to take a bus and then walk four miles. She became only the 16th woman in the country to earn her pilot’s license. 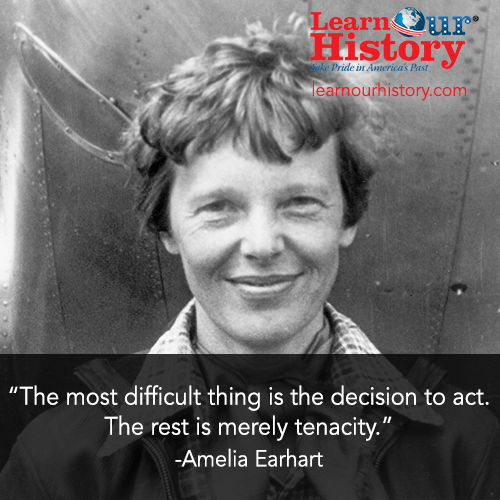 Continuing to fly, Earhart also began to write about her flight experiences and promoted the idea of women flying. She moved to Boston and established herself as a writer for various newspapers and magazines about flying. She was then asked in 1928 to fly as the first female passenger on a transatlantic flight. This event, although she described her actions as sitting like a sack of potatoes on a plane, kicked off her celebrity status.

She became a worldwide celebrity and went on a speaking tour, wrote books and articles, and was affectionately nicknamed “Lucky Lindy” as some thought she resembled Charles Lindbergh, a male aviation celebrity at the time. Publicist George Putnam worked to make her famous, and Amelia even started her own women’s fashion line that was advertised for the “new woman.” She became Associate Editor for Cosmopolitan, at the time a respected magazine, and used it to promote women as pilots.

After asking her six time to marry him, Amelia Earhart agreed to become George Putnam’s wife. However, in a letter to him, she warned, “”I want you to understand I shall not hold you to any medieval code of faithfulness to me nor shall I consider myself bound to you similarly.” She continued, “I may have to keep some place where I can go to be by myself, now and then, for I cannot guarantee to endure at all times the confinement of even an attractive cage.” She never went by Mrs. Putnam, and in fact, sometimes Putnam was referred to as Mr. Earhart.

By 1935, Amelia Earhart began planning another first – to be the first aviator to circumnavigate the globe near the equator. She planned to stop to refuel and rest along the way. Sadly, she, her navigator, and her plane disappeared one early morning somewhere in the Pacific Ocean. For technical reasons, a ship’s radioman was able to receive messages from her but she was unable to hear anything he said, and she was flying off course, out of range of sight or help from anyone. Her plane disappeared on the morning of July 2, 1937. It is still a mystery exactly what happened.