Geronimo is one of the most-recognizable of American Indians who resisted the American government in the 1800s and 1900s. A leader of the Chiricahua tribe of the Apache, Geronimo fought Mexico, the United States of America, and other Native American Indians until he surrendered to the United States in 1886 and died a prisoner of war. Married nine times and father to many children, Geronimo brought fear into the hearts and minds of Mexicans and Americans. 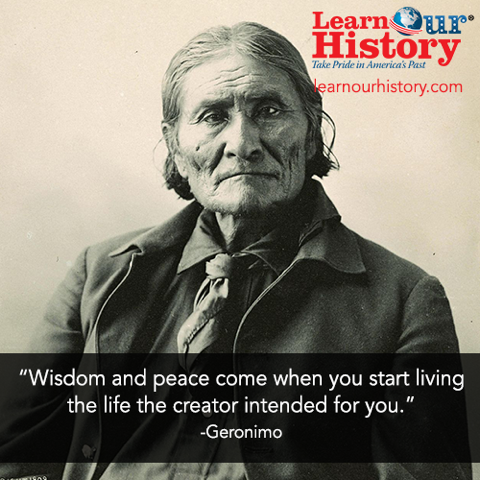 Geronimo was born in Mexico in 1829, in present-day Arizona, and he was raised in the Apache war culture. The Apaches raided Mexican and other Indian villages as a way of life. During these raids, Apache would steal cattle and horses, kill men, and steal women as slaves. In response, Mexico tried to kill all Apache, offering $25 for every Apache scalp. As a young man, Geronimo married and had three children with his wife, Alope. On one outing while he was away on a trading trip, Mexican soldiers came into his camp and murdered women and children, including his mom, his young wife, and his three boys. He vowed to seek revenge the rest of his life against the Mexican

In 1848, the land Geronimo’s Apaches lived on changed hands from the Mexicans to the Americans, and the Apaches were now enemies of not only the Mexicans but the Americans, as well. For the next 38 years, Geronimo and the Apaches successfully waged war against Mexico and the United States of America. His band of soldiers, and women and children, would travel as far as 70 miles a day to avert capture. At the same time, they waged guerilla war against settlers. 5,000 United States soldiers, 3,000 Mexicans, and hundreds of Indian scouts hounded Geronimo’s Apaches throughout the Southwest.

Finally, Geronimo surrendered and he and his Apache tribe were taken prisoner to Oklahoma. Three years before Geronimo died, he converted to Christianity. In his autobiography, he said,

“Since my life as a prisoner has begun I have heard the teachings of the white man’s religion, and in many respects believe it to be better than the religion of my fathers. However, I have always prayed, and I believe that the Almighty has always protected me. Believing that in a wise way it is good to go to church, and that associating with Christians would improve my character, I have adopted the Christian religion. I believe that the church has helped me much during the short time I have been a member.”

However, on his deathbed, it has been reported that he said he was no longer a Christian. This truth of this incident is uncertain, though, and he was buried in a Christian cemetery.

Many Americans did not believe his conversion was real. Stories of his brutal tactics and successes would not allow them to think this Indian leader had accepted Christ. The New York Times noted when he died that Geronimo  “was the worst type of aboriginal American savage. Even his so-called religious conversion was not without cunning.” The Times journalists believed he had converted in order to persuade President Roosevelt to give the Apaches back their land in Arizona.

Geronimo was very fond of marriage. He married nine times and it appears he had many children. Some of his wives, like his first one, Alope, were murdered by soldiers. One witness claims he killed one of his wives when she would not escape from soldiers with him. He did have multiple wives at the same time, which was keeping in tradition with the Apache custom.

Toward the end of his life, Geronimo appeared in Wild West shows, at world’s fairs, and rode in President Roosevelt’s Inaugural Parade. On the reservation, he sold bows and arrows and posed for pictures. As there was little work available for Indians, it is a sign of resourcefulness that Geronimo stayed active through the age of 90. The night before he died, he went into town and got drunk. Riding home, he fell off his horse. Injured and unable to get back on, he stayed out all night long. He caught pneumonia and eventually died.