Helen Keller was born into a wealthy household on June 27, 1880, yet her story is not one of ease and luxury. Helen was struck deaf and blind at the age of 18 months in a time when people with disabilities were not expected to live full lives. Largely due to Helen Keller and the work of her teacher, Anne Sullivan, that is no longer the case. Through her courage and intellect Helen Keller showed the world that the deaf and blind can change history.

As a young girl, Keller was unruly, and this is understandable – she had no way to see or hear the world around her. That all changed with the arrival of Anne Mansfield Sullivan, a poor 20-year old graduate of the Perkins School for the Blind. Sullivan was determined to help young Helen. She began by ‘writing’ words into Helen’s palms one letter at a time. Unfortunately, the young girl had no idea what this meant – she did not know that words existed. 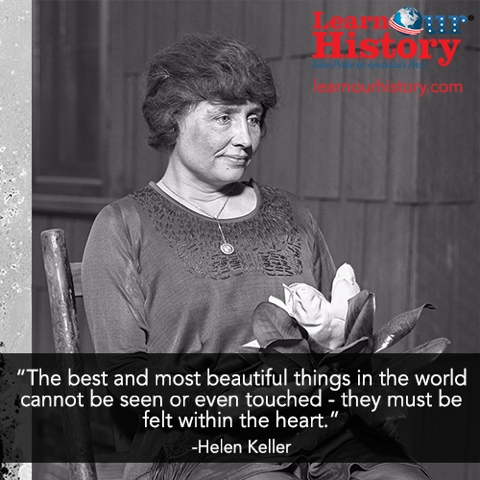 One day, Anne tried something new: she took Helen (7 years old at the time) over to the water spout and signed w-a-t-e-r into one of her hands as cold water poured over the other one. Suddenly, little Helen understood that the fluid touching her body was signified by the word ‘water.’ That day the young pupil learned 30 different words.

Within several years Anne had trained her student to speak, write, and read manual and raised print. Helen was very bright and learned quickly. She learned so quickly that she made it into the news as a blind and deaf prodigy and attracted the notice of such dignitaries as Mark Twain and Alexander Graham Bell. As the young girl entered adolescence she prepared to attend Radcliffe College.

In 1904, Helen Keller graduated from Radcliffe College with a Bachelor of Arts degree with honors – the first deaf and blind person to graduate from any university in the world. At each step of the way she was aided by Anne Perkins, who faithfully traced each letter of her reading into her hand. Anne also helped her with a blossoming career as a writer – in 1903, Helen’s autobiography, The Story of My Life, was published to international acclaim. Helen Keller relied on Perkins until she died in 1936. At that point, Polly Thomson took over the task of helping Keller navigate a world built for those with sight.

Keller always saw herself as a writer. Through the written word, she reached millions of people around the world. A passionate humanitarian, Helen Keller wrote about civil rights, socialism, women’s suffrage, and other issues that fit her Socialist worldview. She became a member of the Socialist Party in 1909. All of her writing gives evidence to Keller’s immense courage and faith in the face of adversity and in her politically radical views. Through her writing, Keller worked tirelessly on behalf of the nation’s – and the world’s – community of deaf and blind people.

Keller joined the American Foundation for the Blind in 1924 and worked for the organization as a writer and speaker for over 40 years. She was also a founding member of the American Civil Liberties Union. Her national profile earned her audiences from president Grover Cleveland to Lyndon Johnson, and she proved expert at using her connections to improve the conditions of disabled people. During WWII Keller visited veteran’s hospitals to administer and support men who lost their sight, hearing, or limbs in battle.

After the war, Keller became America’s first Goodwill Ambassador to Japan. Her visit left a profound impact on Japanese society and the way that deaf and blind people in Japan were treated. Seven years later, in 1955 and at the age of 75, she spent five months traversing 40,000 miles on a tour through Asia. Many of the countries that she visited now have organizations that help the poor and blind that started because of her.

Keller continued her work until a stroke limited her capabilities in 1960. She passed away in her sleep eight years later on June 1 at the age of 87. She is remembered all over the world as a champion for those with disabilities, as well as workers, women, and minorities. Today, her image is etched onto Alabama’s state quarter, the only US coin to feature braille.