Kateri Tekakwitha is the first Native American to be canonized a Catholic saint. She was born in 1656 in what is today the state of New York. Her tribe was the mighty Mohawk, her father was Chief Kenneronka, and her mother was an Algonquian who had been assimilated into the Mohawks. Her Mohawks name “Tekakwitha” means “one who bumps into things.” Kateri had a tough childhood and was faced with many moral challenges throughout her life.

From a young age, Kateri suffered hardship. At the age of four, her parents and her younger brother died of smallpox. She survived but her face was badly scarred, she suffered poor eyesight and poor health the rest of her life. Her aunt adopted her. At the age of 10, Kateri’s village was attacked by the French, and to end the fighting her Mohawk tribe agreed to live in French territory with the Jesuit missionaries, who wanted to convert the Indians. Kateri’s uncle forbade her to speak to the missionaries, but she disobeyed him. 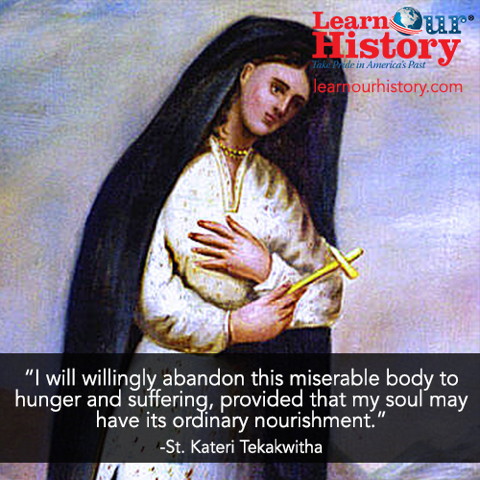 A Mohawk girl in the 1600s was supposed to grow up within the tribe, marry one of the Mohawk men, have babies, cook, weave mats and baskets, and work on the farm. Kateri chose at an early age to do something completely opposite. While with the Jesuits, her tribe was attacked by the Mahican, and she helped the missionaries care for the sick and wounded. After this experience, she told her aunt she never wanted to marry.

In 1674, at the age of 18, Kateri decided to become a Catholic Christian and receive training form the French priests. Most in her tribe were disappointed and angry. She was ridiculed, called a witch, and ostracized. Two years later, she was baptized and moved to the Jesuit settlement of Kahnawake. It was then she took the Christian name of Kateri, after Saint Catherine of Sienna.

At Kahnawake were other Indian converts to Christianity. Kateri was no longer bullied but instead was encouraged to follow her heart’s wishes. There, she met her mother’s best friend who had also converted and other Christian women. Kateri attempted to strive to live a Christian life in how she treated others, in fasting, and even in acts of self-mortification. Throughout the medieval Christian world, many believed that if you harmed yourself physically in honor of God you gained blessings for yourself and others. Kateri wanted to tie her physical pain to the sufferings of Christ.

In 1680, Kateri Tekakwitha died at the Jesuit community of Kahnawake. Witnesses swore that within minutes of her death her facial scars healed and she became radiantly beautiful. Christians built a church in her honor, and pilgrims arrived to pray at her burial site. Some reported miracles that occurred because of Kateri’s intercessions. The Catholic Church proclaimed her a saint in 2012, the first Native American saint.

Some believe Kateri’s story is joyful while others see it as a terrible tale of colonization. Catholics and other Christians point to her to show that Christianity gave Indian women the freedom to do what they want to do and to live in a loving community. Others say that her story shows how European colonization destroyed the Native American way of life and that the missionaries were wrong to convert her.