Margaret Sanger was one of the most influential American women of the 20th century. As a progressive and eugenicist, she believed that some humans were, by nature, inferior to others. Sanger was primarily driven to provide women complete control over their reproductive life and to make it impossible for the “unfit” to have children. Sanger wanted to create a master race. To achieve her ends, she sought to legalize and spread contraception and sterilization. Sanger was not a fan of abortion, but she wanted it legal and her work paved the way for the modern abortion industry. In 1921, she established The American Birth Control League, later to be named Planned Parenthood.

Eugenics, according to the online Merriam Webster Dictionary, is “the practice or advocacy of controlled selective breeding of human populations (as by sterilization) to improve the population’s genetic composition.” Margaret Sanger believed in eugenics. Sanger wrote at the top of her birth control magazine publications, “More children from the fit and less from the unfit. That is the chief aim of birth control.” In a New York Times interview in 1922, she stated, “Superman is the aim of birth control.” In her book, The Pivot of Civilization, Sanger wrote, “Every feeble-minded girl or woman of the hereditary type, especially of the moron class should be segregated during the reproductive period.” Sanger supported infanticide of disabled babies and wanted the legalization of abortion to achieve her eugenic goals. 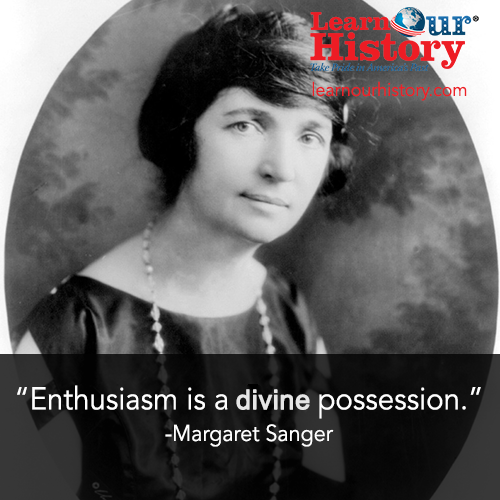 Was Sanger a racist and did she want the elimination of ethnic minorities in America because of their race? That is hard to answer. But there is no doubt she believed she was able to decide who should live and who should not. Writing in 1931 “My Way to Peace, Sanger states she wants the government to :

. . . keep the doors of Immigration closed to the entrance of certain aliens whose condition is known to be detrimental to the stamina of the race, such as feeble-minded, idiots, morons, insane, syphiletic, epileptic, criminal, professional prostitutes, and others in this class . . . apply a stern and rigid policy of sterilization, and segregation to that grade of population whose progeny is already tainted or whose inheritance is such that objectionable traits may be transmitted to offspring.

For Sanger, birth control was the primary method to promote a superior race, although she also wrote in favor of legalizing abortion. During the first half of her lifetime, birth control was illegal in the United States of America. Sanger worked to change society about contraception. In 1921, she formed the American Birth Control League to promote contraception.  In 1929, she formed lobby group to push legislators to make contraception legal. In a 1936 court case, Sanger challenged and won the right for physicians to obtain contraceptives. That next year, the American Medical Association adopted contraception as a normal medical service.

The majority of Americans in the early 1900s believed that God should be in charge of determining when life begins, and that people should not use artificial means to influence pregnancy. Every major Christian religion opposed artificial contraception until 1930, when the Anglican Church approved it for married couples. Shortly after, other Protestant Christian Churches approved it. The Roman Catholic Church still teaches that artificial contraception is inherently evil.

Margaret Sanger sought to control the population, especially in low income, immigrant, and African-American communities. She wrote, “A License for Mothers to Have Babies” with the subtitle, “A code to stop the overproduction of children.” In this publication, she asserted that parenthood was not a right but a privilege that only the state could give. She championed the 1939 initiative “The Negro Project,” which sought to get rid of too many births among African Americans. She declared, “The mass of Negroes, particularly in the South, still breed carelessly and disastrously, with the result that the increase among Negroes, even more than among whites, is from that portion of the population least intelligent and fit, and least able to rear children properly.”

Sanger visited the totalitarian countries of Nazi Germany and Communist Soviet Union in the 1930s. Her main reason was to investigate how these two totalitarian governments handled women’s rights, eugenics, and human reproductive matters. While not a NAZI, Sanger shared the stage with other NAZI eugenicists and did not denounce them. Sanger did not approve of Hitler’s barbarism, but she also did not change her views on forced sterilizations of the unfit or legalizing abortion. After visiting the Soviet Union in 1935, she wrote for the Birth Control Review, ““Russia today is the country of the liberated woman. The attitude of Soviet Russia toward its women…would delight the heart of the staunchest feminist.” She liked that the Soviets gave out free contraceptive devices to women, but she disliked the Soviet use of abortion as a means of mass population control. She didn’t object to legalizing abortion, but thought that Russians used abortion too frequently and women needed more access to contraceptives.

Margaret Sanger died in 1966. Her work changed American society and perhaps the world. For Progressive who think the government and certain “fit” women should decide who should live and who has the right to procreate, she is their hero. When Sanger was born, in 1879, birth control and abortion were illegal throughout the United States of America, and both were viewed as sinful by the great majority of Americans who were Christian. She worked to make every means of birth control and eugenics a reality in America. At her death, birth control was legal in most states, and, seven years after her death, abortion became legal, as well. The organization that she founded, Planned Parenthood, became the nation’s largest provider of abortion and today, promotes abortion and sterilization around the world. In 2020, Planned Parenthood accounted for 345,672 abortions and 2.6 million contraceptive services in the United States. Annually, there are over 1 million abortions in America, averaging 3,000 a day. Sanger’s views on population control, eugenics, and birth control and abortion have had a major influence in the country and in the world.