One of America’s greatest doctors and activists for the least protected in society was Mildred Fay Jefferson (1927-2010). Jefferson was the first black woman to graduate from Harvard Medical School, the first woman to graduate in surgery from Harvard, and the first woman to become a member of the Boston Surgical Society. She influenced a President of the United States of America to change his mind on abortion, and throughout her life, she was a voice for powerless in American society.

Mildred Jefferson was born in raised in segregated Texas and experienced first-hand racism and sexism. She grew up in a time where legally, black Americans experienced injustices because of their color. Her father was a Methodist minister and her mother a school teacher. Even though blacks had less opportunities than whites in the 1930s and 1940s, Jefferson never let her circumstances hold her back. As a young girl, she accompanied the town doctor on his house calls and told him that she would one day become a doctor. This was during a time that nearly all doctors were men and white. She succeeded in her dream.

Jefferson was an outstanding student and throughout her career she broke new ground for black Americans and for women. At the age of 15, she entered Texas College and earned her bachelor’s degree in three years. Normally it takes four years. She went on to earn a master’s degree in biology and then to Harvard and became a medical doctor in 1951. She was Harvard’s first black woman ever to graduate from medical school. She was the first female doctor at the Boston University Medical Center and the first woman to become a member of the Boston Surgical Society. 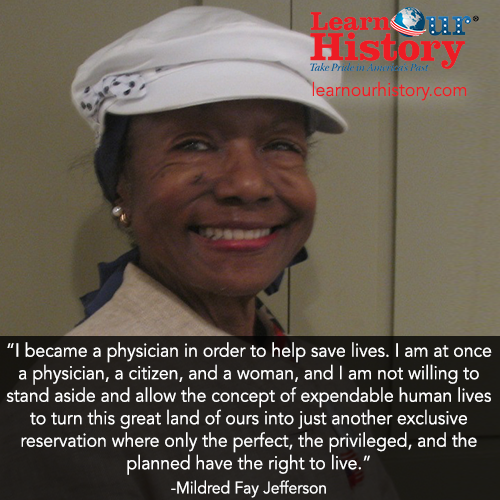 Jefferson worked all her life to defend the innocent and society’s most vulnerable. She strongly believed in the preservation of life, and fought tirelessly to protect the unborn. Around 1970, she was one of the founders of Massachusetts Citizens for Life. She later was one of the founders of the National Right to Life Committee. She was President of this committee from 1975-1978. “Millie” was a persuasive speaker, and after one time listening to her speech, the future President Ronald Reagan became pro-life. He wrote to her, “You have made it irrefutably clear that an abortion is the taking of a human life, I am grateful to you. ” In a 1978 video, Jefferson explained:

“I became a physician in order to help save lives. I am at once a physician, a citizen, and a woman, and I am not willing to stand aside and allow the concept of expendable human lives to turn this great land of ours into just another exclusive reservation where only the perfect, the privileged, and the planned have the right to live.” And, in another interview that same year, ““I would guess that the abortionists have done more to get rid of generations and cripple others than all of the years of slavery and lynchings.”

On October 15, 2020, at the age of 84, Mildred Fay Jefferson passed away in her home in Cambridge, Massachusetts. She was a pioneer in medicine for American women and for black Americans and she tirelessly fought for the lives of those who could not speak for themselves.